Is Your Growth Strategy Flying Blind? 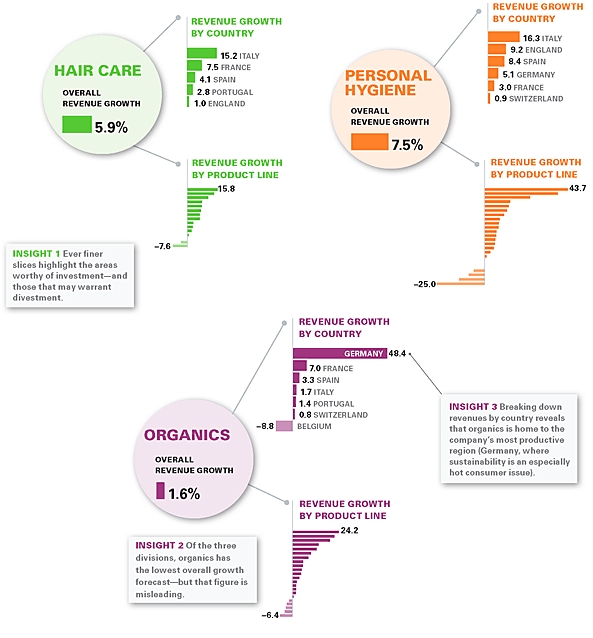 Backing the Best Bubbles of Market Activity
This diversified maker of construction equipment (and, more recently, provider of logistics and project-management services) has four main divisions that operate in the Americas, Europe, and Asia-Pacific. Its offerings range from light to heavy specialized excavation and earth-moving equipment and cranes; it also provides support services such as site lighting, power generation, and mobile offices.
Because the highly competitive construction industry is hard hit by the economic downturn, the firm’s growth expectations of 6% will be challenging to meet. When performance numbers are rolled up to the division level, it is difficult to identify either promising market segments to pursue more energetically or those from which the company could profitably withdraw. Only by taking a granular view of the entire portfolio of activities (by individual product lines, customer segments, and regions) does management get a telling picture of both opportunities and liabilities.
That’s why the firm created this heat map, which shows roughly 4,000 pockets of the business. The bubbles are shaded to correspond to the company’s four divisions and sized to represent the relative value of the business the company currently does in each pocket. The placement of a pocket along the horizontal axis indicates its market share; placement on the vertical axis indicates the segment’s momentum growth rate—how much wind is at its back.
It’s easy to see that more pockets fall below than rise above the company’s aggressive 6% growth target. What other insights can leadership draw from this highly granular view? 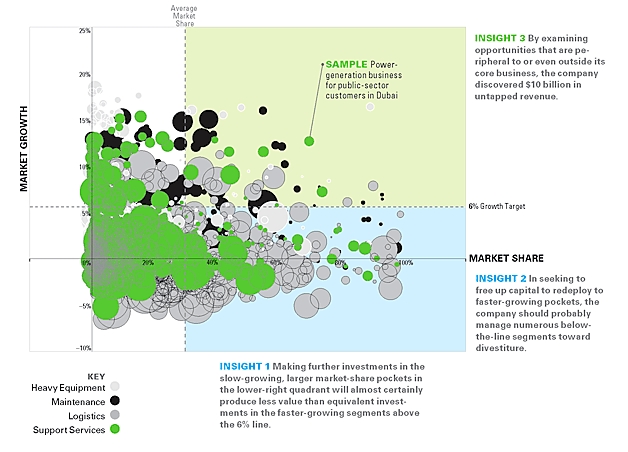 The Full-Growth MRI
Scanning an organization’s overall growth requires looking at three components: mergers and acquisitions, market share, and the momentum of markets in which the company plays. This chart depicts one company’s performance in all three categories, broken down by its five regions and 16 business units. (The absence of a bar for one or more components means its performance ranks in the middle quartiles—neither particularly good nor bad.) The overall growth rating, expressed as a number from 3 to −3 in the small box at the lower right of each cell, is derived by subtracting low-performing components (to the left of the vertical line) from high-performing ones (to the right). By including additional data cuts—product lines, customer segments, smaller geographic regions—this relatively simple 80-cell chart could grow to include hundreds or even a thousand cells. 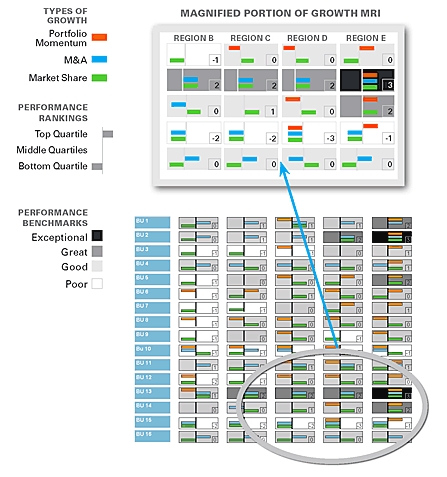 Fighting Gravity in a Downturn
Corporate leaders have a choice as they work their way through a global downturn: Pull in their horns and ride out the storm, or look for opportunities to go on the offensive and get ahead of their competition. If past is prologue, most will follow the first course—and that will be a mistake.
To be sure, it’s an understandable mistake. As revenues slow and margins are squeezed, management naturally switches focus. The company protects its balance sheet, leading to the deferral of growth and low-priority investments, the shelving of large acquisitions, and the sale of assets. Many firms simply freeze under pressure: In the last downturn, the companies in our database with decreased revenues in a major business segment were one and a half times more likely than those with increased revenues to make no portfolio moves at all.
The best growth companies take the opposite tack, treating a recession as a time to increase their lead. They leverage the advantage created by their more-granular management approaches in at least three important ways:
First, they cut discriminately. One client of ours, rather than reduce costs 20% across all business units, asked some “cells” within the organization to cut more than that so other especially high-performing pockets could be spared altogether. The same logic should apply if divestments are needed to free up capital; granular analysis can identify key assets to retain. Done thoughtfully, cost cutting can actually improve the company’s portfolio momentum and enhance the likelihood of outperforming peers in the future.
Second, such firms pounce on acquisition opportunities the downturn creates—and do so with an alacrity that is the stuff of legends (think of General Electric’s speedy dispatch of an army of deal makers to Asia after the financial markets took a dive in 1997–1998). Potential deals that may have been off the table might suddenly be viable again as asset prices fall. This is especially true for small- and mid-cap targets where drops in market capitalization threaten not just their growth strategies but their very survival.
Third, the best growth companies view a downturn as an occasion to take advantage of the competition’s weaknesses. As rivals cut costs and staff, they expose themselves to attack. We worked with one client to identify the 30 most attractive micromarkets where competitors became vulnerable through broad cost-reduction initiatives. The client formed special “blitz teams” to pursue aggressive market share gains in exactly those places.
We’re not saying companies should go on a spending spree in a downturn and tighten their belts in an upturn. Nor are we naive to the fact that some firms simply aren’t in a financial position to exploit the opportunities presented by downturns. But for large numbers of healthy, resilient companies and their CEOs, we hope our findings are a useful counterweight to their natural tendencies, which can lead to missed opportunities.
이전 목록 다음
관련기사