The Definitive Guide to Recruiting in Good Times and Bad

DBR | 1호 (2008년 1월)
by Claudio Fernández-Aráoz, Boris Groysberg, and Nitin Nohria
When economic crisis hits and companies focus on cutting costs—or on their very survival—they slash hiring. But if history is any guide, in the first few months after the upheaval subsides, hiring quickly becomes a front-burner issue.
Consider the period following the terrorist attacks of September 11, 2001, when the economic outlook appeared dire. In rapid succession, the U.S. initiated the war in Afghanistan, Enron’s house of cards fell, other corporate scandals ensued, the SARS scare struck Asia, and the Iraq War began. The economy was in recession, and struggling firms retained only their strongest people. But even before things turned a corner in 2003, the smarter and abler companies—having cleaned house and discovered what was missing from their talent pools—took advantage of the buyer’s market and began staffing for the future. By June 2003, the war for talent was on again in full force, and companies hired aggressively until the economy went into a tailspin in 2008.
History will again repeat itself. Even now, before the recession lifts, our research suggests that most global companies are running into staffing problems in emerging markets, and they are also having a difficult time finding talented younger managers to replace baby boom retirees. These problems will be made all the worse because, we’ve found, current hiring practices are haphazard at best and ineffective at worst. And even when companies find the right people, they have difficulty retaining them.
This article offers our best thinking about the most effective way to hire top-level managers, based on a combination of our own and established research about the relationship between recruiting and long-term corporate performance (see the research sidebar). The following is, to our knowledge, the first time that an end-to-end set of best practices has been put forward in one place. Our compendium comprises seven steps, which cover the full recruitment spectrum: anticipating the need for new hires, specifying the job, developing a pool of candidates, assessing the candidates, closing the deal, integrating the newcomer, and reviewing the effectiveness of the hiring process.
Our Research (Located at the end of this article)
The focus of our research was on recruiting at the top three levels of organizations—C-level executives, their direct reports, and the layer below that. We call this the “top-x group,” where x is the number of senior executives constituting the critical leadership pool in the company. The size of this pool can vary from 20 to 50 people in a midsized organization to as many as 1,000 in a large multinational. We are primarily concerned with external recruiting, although our findings can be applied to internal hiring efforts as well.
Of course, any leader currently faced with the unhappy prospect of downsizing may find it difficult to think about staffing right now. But whatever the future brings, firms that learn to hire talent and retain it successfully will have a distinct advantage in the years ahead.
Hiring Gets a Failing Grade
Most companies react to hiring situations as emergencies; that might explain why so many do it so poorly. When we surveyed 50 CEOs of global companies, along with a pool of executive search consultants who rated about 500 firms, we found hiring practices to be disturbingly vague: Respondents relied heavily on subjective personal preferences or on largely unquestioned organizational traditions, often based on false assumptions.
The executives we surveyed held widely differing views regarding the desirable attributes of new hires. They emphatically disagreed on whether it was best to hire insiders or outsiders, on who should be involved in the recruiting process, on what assessment tools were most suitable, and on what the keys were to successful hiring and retention.
Furthermore, 43% of the executive search consultants reported that their client companies considered the number of years of relevant work experience to be one of the top reasons for hiring a particular candidate, whereas only 24% gave similar weight to the ability to collaborate in teams—and an alarmingly small 11% factored in a candidate’s readiness to learn new things. In today’s increasingly turbulent business and economic landscape, in which, as one of us likes to put it, “even the past has become unpredictable,” we find this neglect of a potential candidate’s adaptability mystifying.
Assessment practices were equally variable (even within the same company). On one end of the scale, in 32% of companies, candidates for senior positions went through only one to five interviews; at the other end, 12% of firms subjected candidates to 21 or more. Shockingly, only half of the top-x managers recruited were interviewed by anyone in the C-suite. Fully half the companies relied primarily on the hiring manager’s gut feel, selecting a candidate believed to have “what it took” to be successful in any job. What’s more, we found that companies based their hiring decisions mainly on interview performance, paying relatively little attention to careful reference checks.
Given the ad hoc quality, lack of specified criteria, and inconsistency of practices among the companies we studied, it’s no wonder that usually about a third of promising new hires depart within three years of being recruited.
It’s one thing to take a poor approach to hiring. But what really stuns us is that many CEOs do not recognize their recruiting situation for what it is; some are even ignorant of their company’s own demographic projections mandating aggressive hiring to replace soon-to-be-retiring managers. Even those who recognize the looming shortage of talent are ill-prepared to fill it.
So what it comes down to is this: Despite a universal acknowledgment that hiring good people is a key source of competitive advantage, we could find only a few companies that excel at one or more aspects of the hiring process and just a handful—most notably Southwest Airlines, McKinsey, Intuit, TCS, and ServiceMaster—that come anywhere close to a hiring “gold standard.” On the whole, there is neither a generally accepted code of best practices for hiring for senior-level positions nor a single company that demonstrates true best practices along each step of the process. 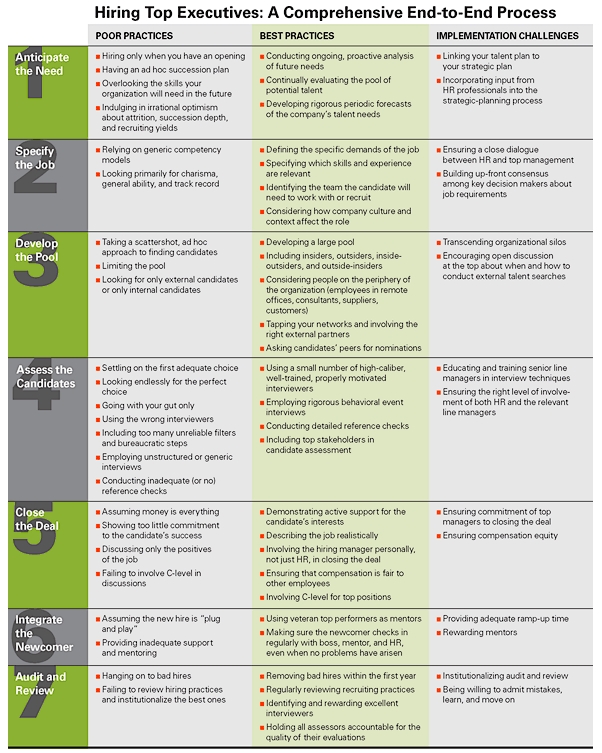